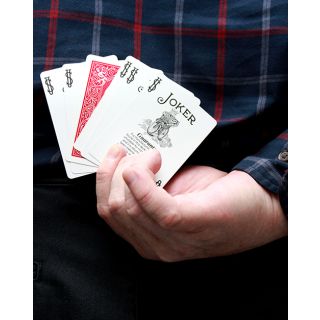 Twelve cards are introduced. Six are handed to a spectator, face-down. He is told to place his six cards behind his back. He is then told to take any one of the six cards, and without looking at it, place it face-down on the table in front of you. You take the remaining six cards and place them behind your back at the same time the spectator does, and place a card face-down on the table in front of him. The spectator is now asked to take this face-down card, put it behind his back, and turn it face-up. Both the spectator and the performer now bring their cards from their back and place their cards on the table face-down. You reiterate to the spectator what has just taken place, and explain that there will be only one card face up in each pile. At this time you spread your pile, showing one card face-up, and the spectator is asked to do the same. The cards match! The spectator might say, “Well that’s easy. All the cards are probably the same.” If he doesn’t say that, you can ask that question by the inference, “I guess that’s easy, all the cards could be the same.” You then tell the spectator, “That is not exactly right. All the cards are the same except for the card that he and you had selected behind your back.” At this time, all the other cards are the same as each other but differ from the matching selected cards.