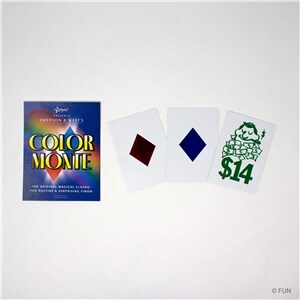 One of the best-selling packet tricks of all time! You show three cards; one with a blue spot and two with a red spot. Explain that this is a game for gambling, and the person that finds the blue spot wins a dollar, but if that person is wrong, he must forfeit a dollar. Then explain that you were once taken by this game, and show how you were taken, losing three dollars because every time you thought you picked the blue card, it was red. So, you accused the man of not even having a blue card. He showed the bottom card as blue, so you lost another dollar! So, you said that if it was the card on the bottom, it couldn't be the one on top, but again, you lost another dollar! It is then shown as the center card as well, and by then, there have been six dollars lost. So, you said that you thought he was using more than three cards, but were proven wrong and lost another dollar. So the gambler gave you another chance, double or nothing. He showed you that one card was red, another was blue, and all you had to do was name the color of the third card. Red, right? Wrong again! It's not red, nor is it anything anyone would expect! Cards are foil stamped and supplied in a carrying case with complete routine.