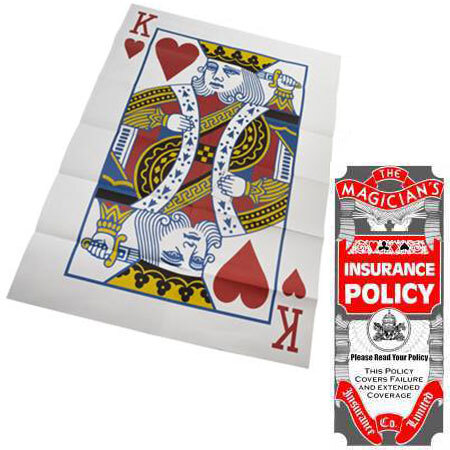 The magician explains that he has taken out an insurance policy against failure. After asking the spectator to pick a card from a regular deck, the magician fails to reveal the correct card. Upon opening the insurance policy to see if he is covered for this, a giant picture of the card is revealed! This is a new design and larger model of an item we have sold for years. It is one of the most appealing methods for revealing a selected card, or three cards selected by members of the audience. Effect: Three spectators select 3 cards. The performer asks them to remember and retain the cards, as he will attempt to find them. After failing to find the selected cards (by wrongly naming them or by cutting the deck at random, and naming a “matching card”) he removes an ‘Insurance Policy’ from his pocket. He explains that he is not worried because he is insured for just such an eventuality by his Insurance Company. “This policy will refund your ticket money or pay my fees if I can’t locate your selected cards!” he tells the spectators and proceeds to read out some of the Terms And Conditions of the policy. These are gag lines that are sure to draw a chuckle. As he comes to the last line, he opens the policy and discloses the first spectator’s selected card printed on it. (Jumbo Size.) Opening the policy one more fold, he discloses the second spectator’s selected card printed on it. (Super Jumbo Size.) Finally opening the last fold of the policy, he discloses the third spectator’s selected card printed on it (in a super Giant Size). You can also perform this with a single spectator. A spectator selects a card, and after failing to find the selected card, the performer opens his ‘Insurance Policy’ and discloses a printed card... “Was this your card? No? Was it a different one ?” Opening the policy one more fold, he discloses an even larger card. “Was it this card? No! Was it a bigger card? Oh! What’s this? Was this your card? It was….!” The magician opens the last fold of the policy to disclose a very large replica of the selected card! The folded policy measures just 3.5″ x 8.5″ and will fit in a shirt pocket. As you unfold it, it grows and grows, until you have the Super Size card on a sheet 16.5″ x 20.5″ – large enough for a large stage. This is a prop which you can carry in your pocket and use any time and any place. The complete instructions and routines are printed as the “fine print” on the policy.